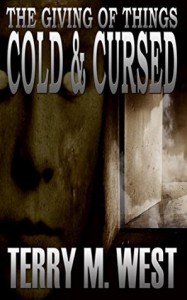 The Baker Johnson Tales is an ongoing series of short stories by Terry M. West, all of them dealing with Baker Johnson, the Black Room inherited from his grandfather, and their shared legacy of darkness.

The year is 1925, the science of parapsychologist is just beginning to read its height of popularity, and detective fiction has just entered its golden age. Enter one Baker Johnson, part flawed parapsychologist, part hard-boiled detective, and part grieving widower and parent. The Giving of Things Cold & Cursed is really more of a character study than a short story, but it's extraordinarily effective in introducing the premise, establishing the character, and hooking the reader with a cold, clever twist at the end.

Without giving too much away, Richard Johnson (Baker's grandfather) was a parapsychologist who investigated paranormal phenomena, collected the haunted objects at their center, and safely stored them away from the world in his Black Room. The problem is, Richard became rather senile and unstable in his later years, and his last act of coherent thought was to order that those same objects be given away freely, returning their darkness into an unsuspecting world. Baker has been called in to settle his grandfather's affairs, and isn't particularly pleased to discover the fabled Black Room empty - for reasons that become all the more chilling upon the final reveal of that cold, clever twist.

The atmosphere here is perfect for this kind of a tale, and Baker is a fascinating character. He's arrogant and cold, almost to the point of abrupt rudeness, but he knows how to read and observe people. He worked alongside his grandfather in collecting those haunted objects, and their absence haunts him almost as deeply as the loss of his family.