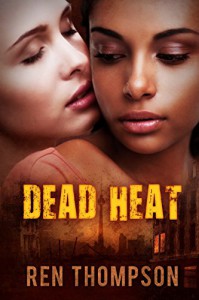 Every once in a while, as the mood strikes me, I like to indulge in those titles that are a bit odd . . . a bit different . . . a bit bizarre . . . and a bit freaky. These are books that don't get a lot of press, and which rarely get any retail shelf space.

Pay no attention to the gorgeously misleading cover. Dead Heat is a book that was pitched to me as a "horror / zombies / lesbian novel" with a trigger warning for "dark themes and also for snuff" - and that pitch is exactly what this novel is all about.

The post-apocalyptic zombie genre has been done to death, but Ren Thompsonhas managed to do something fresh and original with it that I really enjoyed. This was dark, twisted, and extremely creative in the telling.

Before I get into the story itself, let me geek out for a moment. This may be a near-future zombie apocalypse, but the soundtrack here consists of classic Motorhead, Iron Maiden, Guns 'n Roses, and more. Thompson uses music to set the scene in a number of places, and the rumbling bass and racing guitars are perfect for getting the heart racing. Also, this is a story that unabashedly Canadian, taking us from the abandoned ruins of Ontario Place, to the streets of Etobicoke, to the Scarborough Bluffs, Wasaga Beach, and even Niagara. I'll be honest, that makes my heart bleed red and white all day long.

Okay, so back to the story. This is a book about zombie hunting, brutal cage matches, and near-homicidal rules of conduct that involve beating strength into people . . . and tenderness out. As the story opens, we see Dana Layton falter in the face of true zombie horror, putting the rest of her zombie hunting team at risk. It's completely understandable but, in this world, just as completely inexcusable. Upon return to camp, she's summoned before their leader, who proceeds to invite the team - including her girlfriend - to beat her nearly to death.

And that's the normal part.

So, where does the WTF element come in? Well, in a world torn apart by a zombie apocalypse, there are always people who are willing to sink lower than zombies. In this case that means zombie snuff porn . . . and that means precisely what you think it does. We're talking women riding zombies bound to the bed, some of whom are zombified in mid-coitus, while others are left to be fed upon as an after-orgasmic snack. Thompson spares us the truly pornographic details, but there's no question what's going on - and getting insight into the minds of the producers is even uglier. It's not just darkness for the sake of being disturbing, it's a crucial element of the plot, and it all plays into the final climax (no pun intended).

That's not to say it's all doom and gloom. There are glimmers of hope, including an East Coast refuge for repopulating the Earth, and some interesting studies into whether zombies are evil, sick, or just soul-less animals. Then, of course, there is the romance between Dana and Kelly that grounds the two women, gives them hope, and counters the blood and darkness they face night-and-day. The romantic element is definitely secondary to the horror, but still an integral part of the plot . . . and an interesting part of its telling.

Dead Heat is not your standard zombie novel. It's something deeper, darker, and more delightful. Thompson plays with emotions almost as well as she does with words, crafting a novel that completely delivers on its pitch.