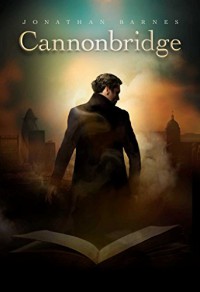 Disclaimer: I received an ARC of this title from the publisher in exchange for review consideration. While I make every attempt to avoid spoilers, please be aware that an ARC synopsis, press release, or review request may disclose details that are not revealed in the published cover blurb.

I wanted to like this, I really did. Reading the cover blurb of Cannonbridge for the first time, it immediately sparked my interest as both a fan of imaginative fiction and as an English major well-steeped in the classics around which the story seemed to be built. Unfortunately, I foundJonathan Barnes’ narrative rather weak, pedestrian even, and really had a hard time settling into the tale. The pacing was slow, as in glacial erosion slow, and the constant jumping around between the stories of Judd and Cannonbridge did nothing to provide a spark.

On that note, the Cannonbridge pieces were too clever by half, coming across like a last-minute, late-night University essay that attempts to name drop as many authors as it can, in an attempt to disguise its lack of substance. Everything depends on the wildest of coincidences and, what’s worse, there don't seem to be any consequences to Cannonbridge's influence on the literary world. Given all the people he interacted with, I really expected to see some demonstrated proof that "the most influential creative mind of the 19th century" really had . . . well, influence.

To make matters worse, the contemporary portion of the tale is no stronger, with Judd really nothing more than a plot device. He had no personality to speak of and no charisma to draw us into the tale. He was neither an overexcited grad student nor a flabbergasted professor – he was just a guy with a feeling that something was off. As for that, there's absolutely no justification provided for his sudden 'feeling' that Cannonbridge is a hoax. I was looking forward to a Dan Brown level deconstruction of the classics, filled with meticulous research into clues hidden within the literature, but I was left wanting.

Admittedly I skimmed a lot of this, just to see where it was going, but at no point did I find myself getting pulled back into the text. What's more, I didn't feel like I really missed anything by skimming, and I think that tells you all you need to know aboutCannonbridge. Maybe my expectations were off. Maybe I was looking for something that was never supposed to be there. All I know is that a ‘good’ story generally needs 2 of 3 core elements to work, but the narrative, the characters, and the plot all came up lacking for me.