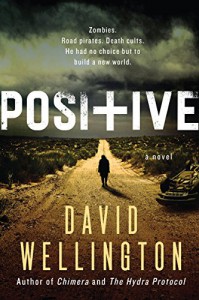 Given that I've grown rather tired of zombies, dystopian futures, and coming of age angst, it's surprising how much I enjoyed Positive. It's neither great literature nor a genre blockbuster, but David Wellington's latest is an entertaining tale of survival against all odds with just enough flourishes of creativity to (almost) balance out the moments of deus ex machina.

This is a story told in arcs, the first of which is actually the most interesting, as it establishes the world one generation removed from the zombie outbreak. He doesn't attempt to explain it, just acknowledges that it happened, as the focus is on survival in the new world created by the collapse. This is a world where America is in ruins, the water is toxic, and highways are abandoned, and the zombies are still wandering the wilderness. There are some exquisite set pieces here, including the flooded subway tunnels of Manhattan and the bombed out town of Trenton, and they provide much of the appeal.

The characters, unfortunately, are rather thin and undeveloped. Finnegan is forced to grow, but he does so in leaps and bounds, trading his youthful naivete overnight for a jaded sort of street sense. Those around him are really just playing roles, and we never get deep inside their thoughts or their emotions. The villains are, not surprisingly, the most interesting of the bunch, but even they're largely one-dimensional. Adare is a pragmatic survivalist who doesn't mind looting to stay alive, and he's actually be almost respectable if it wasn't for his predilection for underaged girls. Red Kate I thought had some real potential, and I kept waiting for some deeper layers to be revealed, but she never rises above her bad-ass road pirate role. Anubis and his skeleton cult sounded promising, but he's left completely off the page, and all we get to see are the stalkers to preach the doctrine of sacrifice.

All that aside, it really is an interesting tale of survival, with the second story arc introducing us to the looters, outlaw towns, and corruption within the army. The third arc gets rather dark, as we discover that some things really are to good to be true, and that sometimes one man's sanctuary is another's prison. The final act, though, is the strongest of the them all, as we bear witness to an act of rebuilding, an attempt that everybody thinks is ludicrous, but which earns the respect of even the army. Of course, this is also the act where everything comes to a head, and all the enemy forces converge on Finn and his people, but it's well-plotted with some real moments of sorrow and drama.

If you're as tired of zombie novels as I am, then rest assured that Positive is a novel about the survivors, not the zombies. It's a post-apocalyptic sort of morality tale, one in which the evil are punished, the good suffer, and hope shines through. It has its flaws, no doubt about it, but it's a legitimate page-turner right through to the end.