Every once in a while, as the mood strikes me, I like to indulge in those titles that are a bit odd . . . a bit different . . . a bit bizarre . . . and a bit freaky. These are books that don't get a lot of press, and which rarely get any retail shelf space. 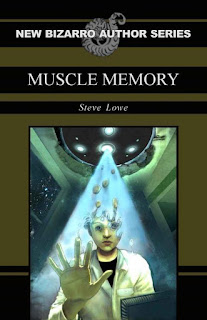 I shoulda known something was up when the dog meowed at me.

As so begins a simple little tale that's moreTwilight Zone or Tales from the Darksidethan what you might expect from theBizarro genre. Yes, Muscle Memory is fun, twisted, and just a tad perverse, but it's also a thoughtful, deeply reflective tale from the pen of Steve Lowe.

It starts off on a suitably surreal note, with a body swap discovered in bits and pieces, the clues slowly assaulting an already suffering mind. Billy has woken up in the body of his wife, Tina, a new mother suffering from postpartum depression and a strained marriage. The fact that it takes the intervention of his body-swapped neighbors to make him aware of those facts is sad, but the eventual discovery of why his wife lies dead upon their bed, trapped inside his body, is absolutely tragic.

There are most definitely patented moments of Bizarro humor here - Tucker's far-too-long bathroom break of self-exploration, the neighbor who has seemingly confirmed everyone's suspicions by waking up as one of his sheep, and the odd afternoon of drinking among familiar friends in unfamiliar faces at the bar - but they're not the focus. For much of the story, Lowe leads along in search for answers as to how/why it all happened, but that's not the focus either. Ultimately Muscle Memory is a story about what Billy did to deserve it . . . and what he'll take away from the experience.