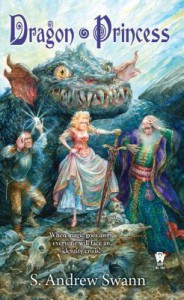 For a book that I picked up on a whim, and which I fully expected to wear out its novelty factor early on, Dragon Princess was a pleasant surprise. S. Andrew Swann isn't quite up there with the likes of Terry Pratchett or Douglas Adams, but he strikes a nice balance between humor and storytelling that reminds me of Lee Battersby and his stories of Marius don Hellespont.

Dragon Princess is a story that tales great pleasure in twisting and toppling the gender tropes. Here we have a thief pretending to be a knight, a wizard with ulterior motives, a dragon with a gambling problem, a princess who would rather be a dragon, an stuffy old knight who actually serves the Dark Lord, an awkward barbarian who is the smartest of the bunch, and some of the greediest elves you're likely to ever set eyes on.

Much of the humor here is in the storytelling, with Frank Blackthorne a self-depreciating narrator with a sarcastic sense of pessimism. It's his narration that keeps the story from exhausting the novelty factor, while the personalities of Frank and Lucille serve to draw the reader in and elevate the story above its bodyswap/genderswap roots. I wasn't so sure about the late introduction of Brock, but I came away from the book hoping the barbarian has a prominent role in the sequel. Swann weaves a surprisingly complex story here, with multiple plots and schemes all coming together in the end, and a wide cast of characters who keep the story moving along.

Quirky and fun, Dragon Princess is that rare breed of novel that succeeds as both a work of fantasy and humor. It had me smiling throughout, and even laughing aloud at times.