#Horror Review: Sherlock Holmes and the Servants of Hell by Paul Kane 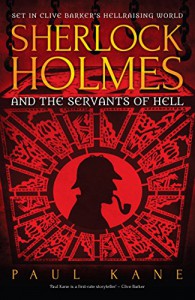 Sherlock Holmes and the Servants of Hell. There is so just much potential in the concept. Handle it right, and you've got yourself a horror/mystery that is destined to become a genre staple. Fumble it at any point, however, and you have two separate camps of fandom ready to critique, condemn, and drag you to . . . well, Hell.

Fortunately, Paul Kane knows his stuff, and what we have here is no mere imaginative lark. Sherlock Holmes and the Servants of Hell is a very carefully constructed story that considers the legacies of both Doyle and Barker, and which not only finds a point at which the two can meet, but one in which that intersection actually adds something to each respective story.

In terms of narrative, this absolutely feels like a Sherlock Holmes story. Kane captures the voice of Dr. Watson exceptionally well, and explains away any irregularities by presenting it as a tale that Watson never intends to publish. Furthermore, he sets it after the incident at Reichenbach Falls, using the Hellraiser mythology to cleverly explain the shift in Holmes' character and personality in those latter tales. He also does some clever work with The Hound of the Baskervilles, taking one of the most horrific Sherlock Holmes tales and casting some doubt upon its casual dismissal of the supernatural.

As far as Hellraiser is concerned, reading this is like an epic Easter Egg hunt. Kane touches upon all aspects of the extended mythology, including details from the original Hellbound Heart tale; the Hellraiserfilms, Barbie Wilde's tales of Sister Cilice in Voices of the Damned, and even several tales from theHellbound Hearts anthology. There are some very nice parallels to the original story of the Cotton family; some fantastic background on the Lemarchand family and the Lament Configuration puzzle box; a gloriously grotesque band of Cenobites; and a vivid exploration of Hell that fits in very well with last year'sScarlet Gospels.

In bringing the two worlds together, Kane remains true to the feel and the style of the Sherlock Holmes mysteries, but drags the story into darker, more decadent corners of the Victorian world. There is torture aplenty in this tale, both of the human and the Cenobite variety, and a BDSM-themed brothel that really allows him to play with (and foreshadow) the dark eroticism of Baker's sadomasochistic fantasies. Ultimately, however, it's the relationship between Holmes and Watson that makes the story work, testing the deepest, darkest bounds of friendship, and exploring the absolute darkest chapter in their shared story.

If you do choose to open the cover of Sherlock Holmes and the Servants of Hell, be forewarned that once you're well-and-truly hooked, the pages (like the puzzle box) do tend to turn themselves.